From ethical to bioregional consumption . . . and production 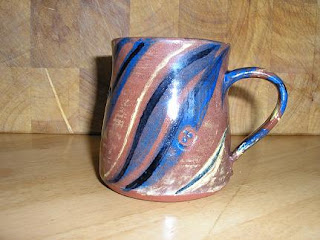 As we move towards a world of less trade we need to be thinking about how we will get hold of the things we really need. We can start making the adjustment now in our own consumption. This has two big advantages. First, it means that when the changes come - and they may be sudden and rapid - we will already be mentally prepared. Secondly, we can support the development of the markets offering the kind of goods we will be buying in the future, thus easing the transition.

Here are a few examples. I have a beautiful mug that I bought at a Christmas fayre. The local potter had just dug a hole near the college where she teaches and burrowed out some clay. She had spent a long time refining it and then turned it into a mug. This is an exceptional mug because she usually buys in clay from Staffordshire. She was as delighted as I am to see the exact colour of pottery made from Stroud clay. It is also unique since she only made one. 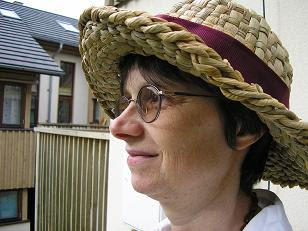 I also have a rush hat made by Sheila Wynter. Sheila goes every year in the right season with her son to the river Avon just above Tewkesbury. Here they dabble in the mud and cut the rushes. She brings them home and dries them in her workshop before weaving the hats. They have a curious rustic look which my daughter points out is just the look of the hat worn by the artist in the famous Van Gogh portrait.

For me these items exemplify everything about bioregional consumption. Obviously the first and most important factor is that they are made locally with local inputs. But there is the depth of relationship between me and the person who made the item that fills me with delight every time I have a cup of coffee or go out wearing my hat. Of course for me they are also object lessons which people I meet - unfortunately for them - cannot escape.

Perhaps most importantly of all, they are expensive. In the global economy you seek the lowest price. In the bioregional economy the adman's slogan 'reassuringly expensive' may be a better guide. My rush hat cost £24. Given the amount of work for Sheila in cutting the rushes, preparing them, and weaving the hat this is an absurdly small amount of money. But if it had been made by a Chinese slave it would have cost a fifth of this price. So when you consume bioregionally you will have much less stuff, but it will be of vastly better quality.

It's not just about consumption; it's also about production. I came to know Sheila because I am learning basket-making from her. If you are the sort of person who bemoans the fact that there is so little available to buy from local producers you can start by choosing to buy what there is and paying a just price. But the next step is to start making something yourself - the guidelines are that it should be something that is genuinely needed in the community and that you can find the materials locally.

And remember the other hint from Robinson Crusoe: use what the global economy has already invested energy in to the maximum before you resort to buying new of any sort. So patching and mending and buying from charity shops is a good solution for stuff your local economy doesn't provide yet. Why not go for showy, artistic patches: make a political statement with your darning! Tweet
Posted by Molly at 08:58